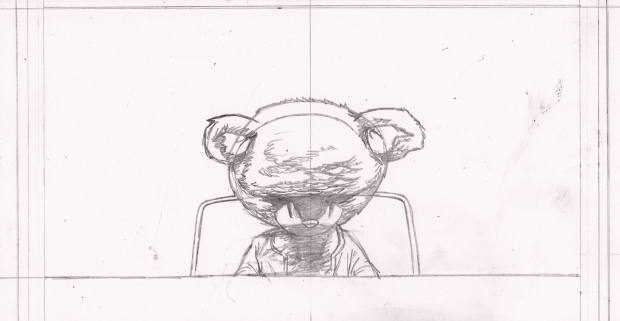 So, it’s that time again. The third instalment of Moon is beginning to hove into view. With it is the introduction of a very special kind of evil. Revealed briefly in Moon 2, BunBun Warmheart is a villain that had everything going for him. Now his crimes against humanity mean not even his cute little face can get him off. Our hero, Moon and Shades will be facing this little bleeder directly. What will they find out? What will they glean from this little furry bastard?

This is very much the start of the first story arc for Moon. The introduction is over – now it’s all about the investigation! Moon and his new partner, Shades Rodriguez are about to start dog paddling in dangerous waters, and there be sharks there. Heavily armed, laser guided, furry faced sharks that want to bite their legs off. With guns. And things. Threats will come from directions you’d never expect. You have been warned.

Evil is back. And it’s sitting on a raised chair in an interrogation room at the heart of the Agency. 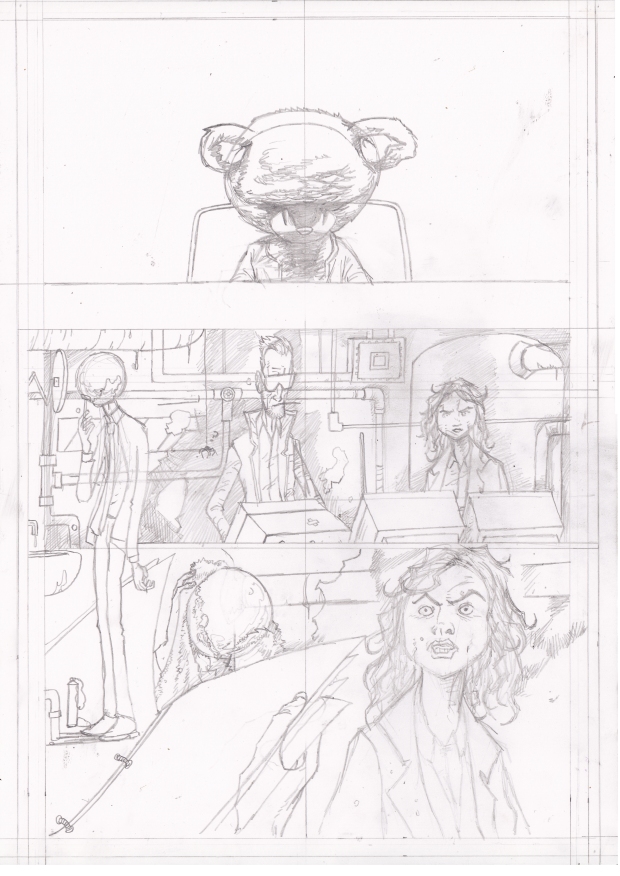 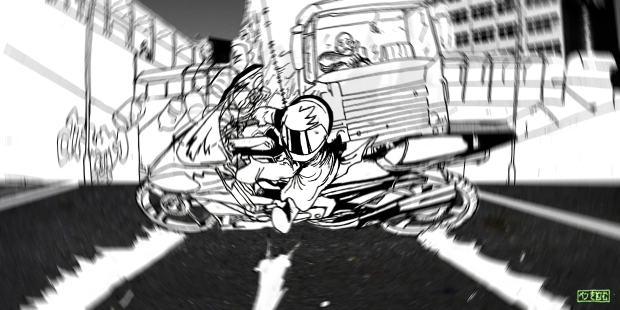 Chaos is beginning to break out all over the pages of Moon 2. Not entirely sure how as initially the script for the second issue was looking clever, funny and a little sombre at times – but what wasn’t picked up was the potential for complete lunacy to break out.

Dan Thompson is a smart, witty and uncanny writer with a real sense for a one liner – something that perhaps hasn’t been as obvious since our main character doesn’t have a mouth. But it’s all there in Issue 2, more so than in Issue 1 as the fallout continues from the explosive first part!!

We can promise a certain number of things and two in particular; a lot of bullet cartridges in part one, with the potential for an explosion or two and a lot of rain in the second half. A lot. The rain has become something of a matter of pride for myself and our colourist Ivanna Matilla. Dan insists the introduction of every foreground rain drop – in detail – was in the subtext (something I’d have to agree with) but the astounding thing is the way Iv has dealt with the scale of the job. Every single raindrop has been recoloured – o astonishing effect and the tone and pitch of the English weather’d make you think Iv was born in Greenwich.

But the big reveal is still unrevealed – namely the killer of Counsellor Hugh Griffiths, now loose and wild on the streets of London town. New meaning to words ‘Baby on Board’. 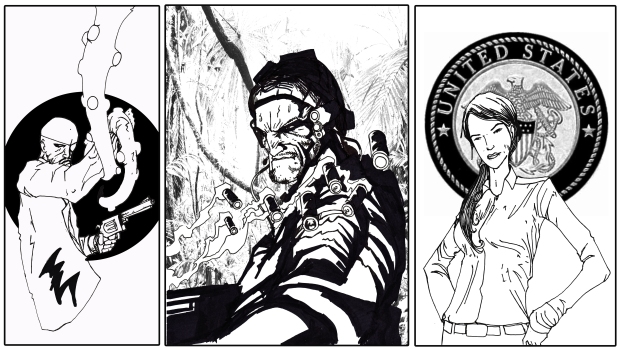 It’s been a while since the Unseen Shadows Anthology (featuring Clancy Wallencheck:Band of Butchers, Napoleon Stone: Fragments of Fate, Stephanie Connisbee: Operation Solomon and Reverend: Wrath of God). The next anthology is in the process of being completed – this time featuring Ben ‘The Hand’ Ashodi (from FH 1) and Nathan Ash (written by our very own Dan Thompson).

At the time of Unseen Shadows I drew a scene based on Dan’s writing. As I’ve been looking through some of my old artwork I found that sketch and thought I’d stick it up for your perusal. First time Dan will have seen it too. Surprise, Danno!! 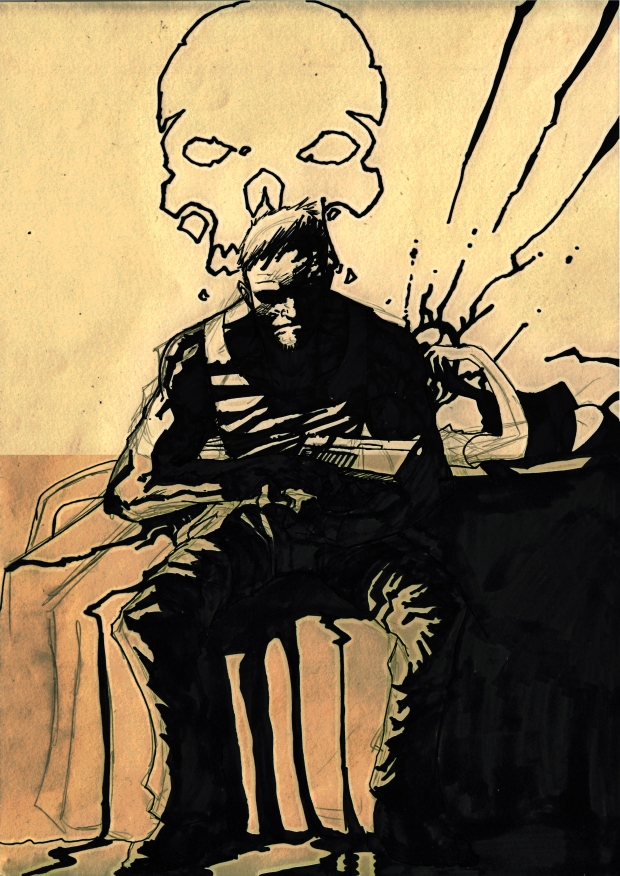 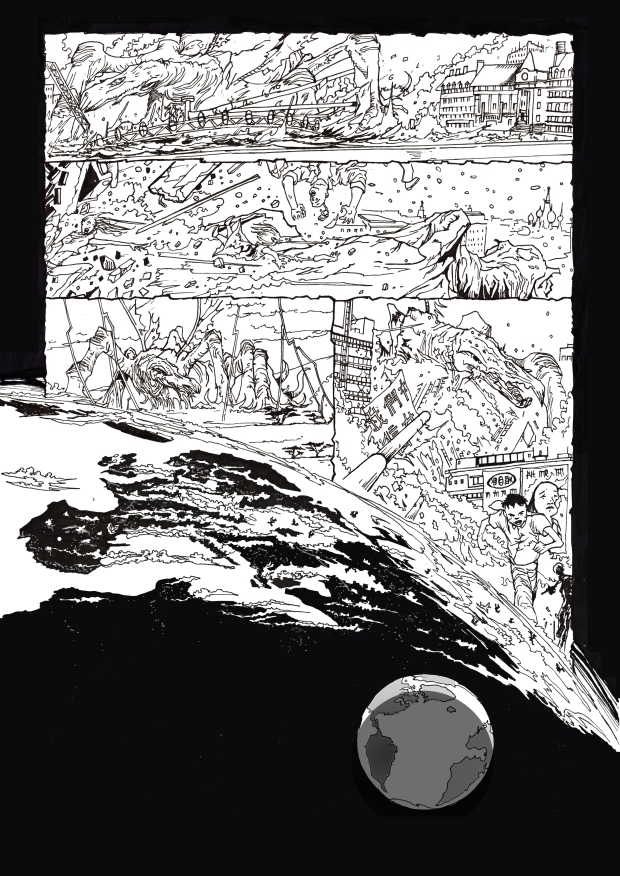 Little while ago Martin Conaghan, writer of Burke and Hare (graphic novel) and Fallen Heroes – on which work on Issue 3 is about to begin – asked if I’d help him out. His colleague Geoffrey D, Wessell had a short story involving a monster designed by Jacen Burrows no less to be released in the new OVERLOAD.

I know nothing about OVERLOAD – except that it’s an anthology publication (Indy) and this is the first issue so there’s an element of blind faith involved here.

However the script itself is a bit marvellous and a bona fide dream for an artist. Never get the chance to draw the whole world!! 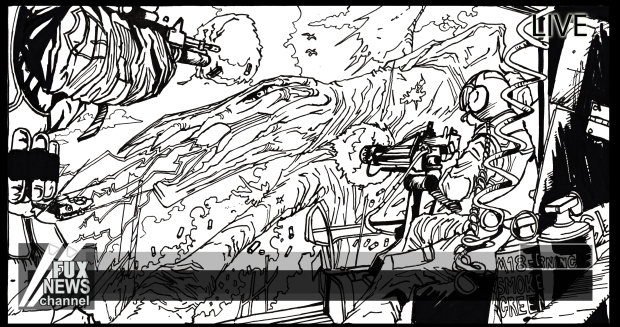 Some time ago I was contacted by Martin Conaghan (Fallen Heroes, Burke and Hare) to see if I could help him out on a publication called Overload. I still don’t know that much about Overload except that it’s an anthology title for creatives and will be launched by Martin – and others – at Kapow.

I agreed, automatically assuming that it’d be fine and I could mix it into my usual timetable. This turned out to be more of a struggle than I anticipated (I rarely have a timetable) but when I read the script by George D. Wessel I knew it had to be done.

Add to this the fact that Jacen Burrows created the main creature that appears in the story and I can confirm it is 6 pages of the most intense writing I’ve ever dealt with.

To tell you what else is in it would spoil it, however Fenrir, the creature Burrows created before he got famous some time ago, is the least of events that take place in the short strip. Part of a big anthology with a host of other talented artists (some of their previews will most likely be posted here over the next few weeks) it should be worth a look.

Having not seen anyone else’s work on the project there is no way for me to know if my work is up to scratch but based on word from Mr. Conaghan I’d say the line up is incredible (worryingly)…

Bingo Mole is the affectionate term that we’ve applied to the villains you saw at the end of Moon #1. It’s not their real name but if we told you that we’d both spoil the story and not get to use the awesome phrase that is “Bingo Moles”.

Now that we’ve explained that little detail, proceed to feast your eyes on some brand new preview art for the upcoming second issue of Moon. It’s all kicking off and the Moles are right in the middle of it! Pencils and inks are by Steve Penfold, colours are by Ivanna Matilla. 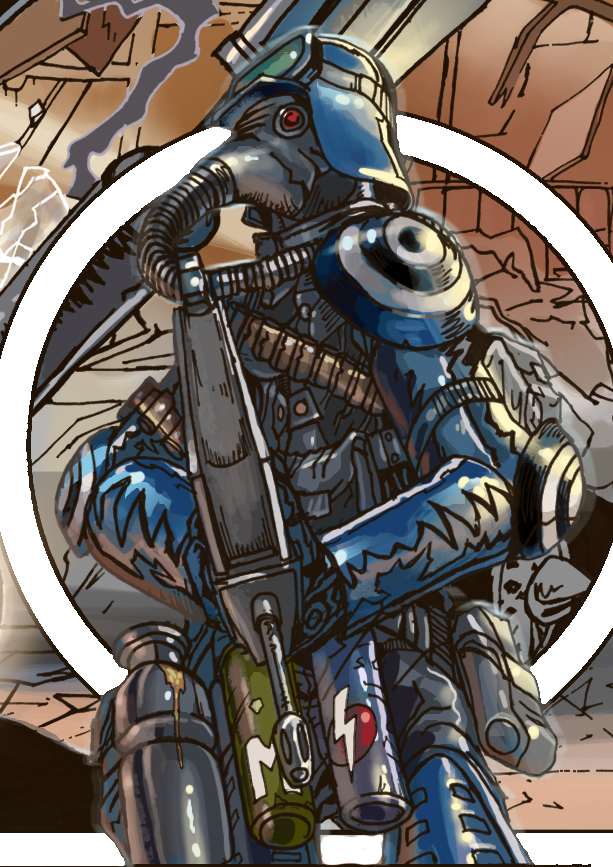 The deck’s stacked against our heroes, but there’s still a wild card left to play.

A hero falls, another rises and an astral body grows a beard!

It’s all in the facemeltingly exciting second issue of MOON! 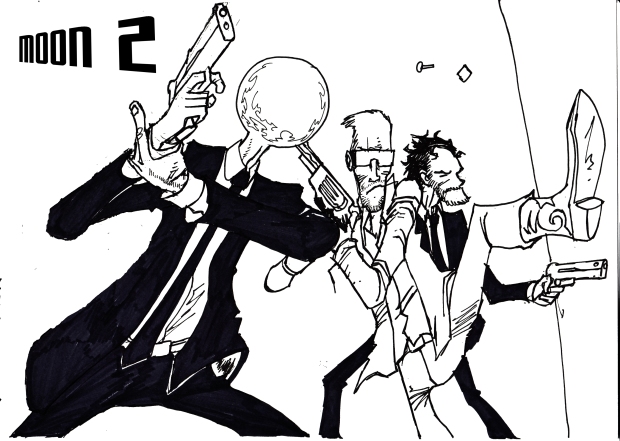 One of my main worries about drawing several books at the same time is stylistic. Moon and Fallen Heroes look very different in style. My intention is that The Reverend will also be a little different as the focus on its central character sort of asks for a more naturalistic style. Just to brush off the cobwebs for each project I try to sketch the characters just to get them clear in my head again before they start going back onto the full page. Who am I telling? No one. Its not very interesting but frankly a picture with no blurb underneath looks well weird. With Iv and Gat waiting in the wings Moon and Fallen Heroes pages will begin to appear inevitably before the end of this week. Check back here Thursday for FH updates and Monday for more Moon.

Trading Card design introducing one of the characters from Destroy all Robots by Darrin Grimwood, a novel in which a disparate group of robots specialised for specific industries are pitched against each other in a televised fight to the wrecking yard on an isolated Island on the South China Sea. Completed in 2010, Darrin is currently pitching the idea in the US. More info is available at http://www.destroyallrobots.com. 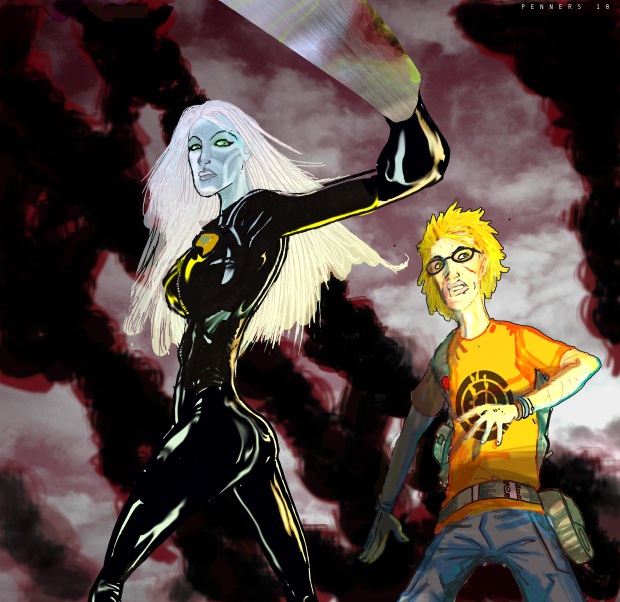 I’m back and I’m ready to get some high end work done. Trying hard to complete everything I can as quickly as I can (without affecting the quality). Currently working on the draft work and concept designs for all three titles; Moon 2, FH 2 and a neat little one-shot to be announced later on this week. I’m also developing a couple of scripts at present (egads! He’s going to try and write something) so keep an eye on that to see how I do…. ;-). That’s right – I did a smiley. Whatever man.

… and just to pep you up. Here’s the colour first panel from page 1 too. Just to remind you what the finished article looks like….

Okay. I get it. You’re getting bored of seeing replays of the existing book. Well, hopefully next week there’ll be something very new to see here…. 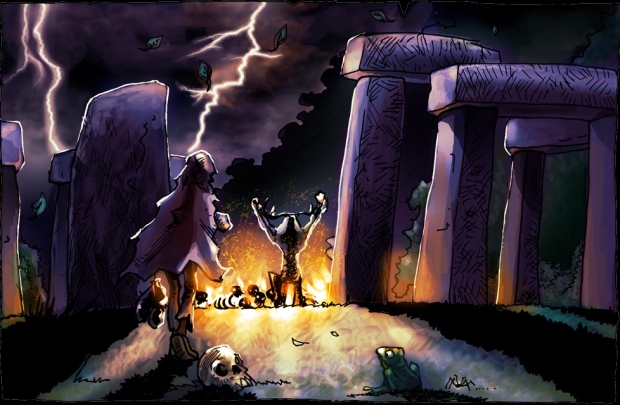 Trading Card design introducing one of the characters from Destroy all Robots by Darrin Grimwood, a novel in which a disparate group of robots specialised for specific industries are pitched against each other in a televised fight to the wrecking yard on an isolated Island on the South China Sea. Completed in 2010, Darrin is currently pitching the idea in the US. More info is available at http://www.destroyallrobots.com. 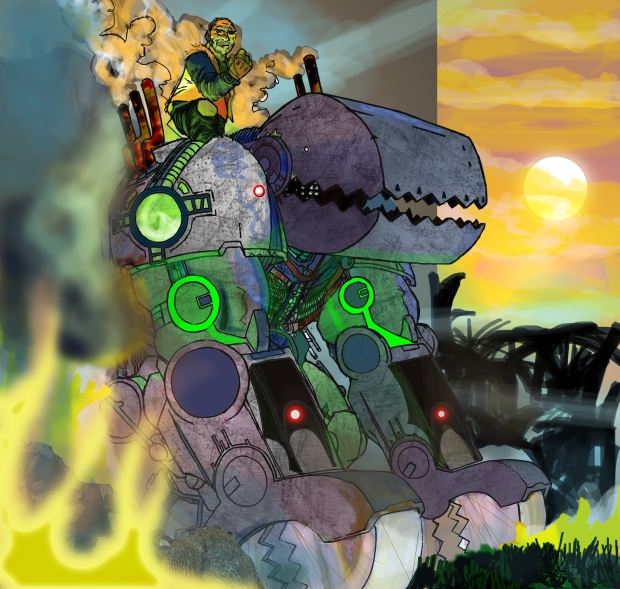