Those of you who follow me on twitter will know that I’ve been having a bit of a moan lately about how as a writer you’re never allowed to talk about the stuff you’re working on. It’s a one of the drawbacks of being at the very start of what is always a very long creative process but there are very good reasons for it. Many projects that get started go nowhere and if I went around every script that I started work on then you’d come to believe that we have an upcoming catalogue comparable to Marvel. 90% the stuff I start writing goes in the bin or goes back into the closet to be brought out at a later date and until one of those ephemeral ideas begins to coalesce into something more substantial, I don’t see any benefit in talking about it publicly.

Which is all a rather round about way of saying that I probably have another new comic coming out later this year. Since Christmas I’ve been working on a new Unseen Shadows one shot for the follow up anthology to Tales of the Fallen (available from all good stockists and this one) and it looks like it’s far enough along that you can all know about it now. The script went off to Unseen Shadows editor, Barry Nugent, last week and, pending a few edits we should be looking for an art team in the near future. 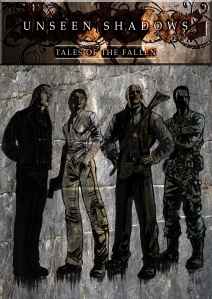 The comic itself is not a direct follow up to last year’s Band of Butchers but rather will feature a tale about Unseen Shadows’ front man, Napoleon Stone chasing down his old mentor in a story of friendship, betrayal and big fights in exotic locations. It’s been a real thrill to get a crack at writing one of the Unseen Shadows A-listers and, as always, Barry has proven to be a very fine editor indeed. The man knows his universe but he’s not afraid to let others play in it, the perfect combination to my mind.

I’m now going to go back to doing that annoying “not talking about the project” thing as we need to secure the rest of the dream team that will bring this book together. As soon as I know more about stuff like release dates etc, I promise that I shall let you know. For now be content to know that if you dug Tales of the Fallen then you will be smiling even more by the end of 2012.

(I’m also working on a film project right now…but I can’t talk about that.)