The trouble with Paul Cemmick is it’s too easy to overstate his talent. It’s not that it’s not present – in fact the scale of it is incredible – but it wouldn’t be English to express too enthusiastically just how exciting and impressive a full page of Cemmick’s work truly is. And that wouldn’t suit Cemmick. His is the stuff of England. Lunacy and silliness so inherent in his linework that it’s hard to explain. The physicality of any character in a Cemmick page is height, width, facial features and stupidness. His basis as an incredible caricaturist blends perfectly – communicating precisely everything you know about every character the moment you take a look at it – whether it’s the small, strident figure of girl-ahead-of-her-time Maid Marian, leader of a band of rebels, the handsome, lanky and innately cowardly gangle of Robin of Kensington or the Face of Bo in a recent Doctor Who poster – it’s always a massive joy to behold. 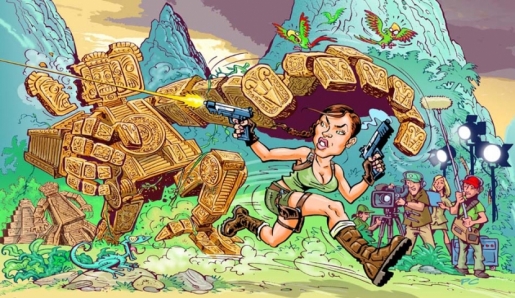 Paul Cemmick is a cartoonist and caricaturist whose designs and work have been seen in many different media, most prominently animation, (British) comics and book covers. According to the website ChildrensIllustrators.com, Mr Cemmick “started drawing cartoons as a child by copying Popeye, Tom and Jerry and Yogi Bear from his gran’s TV.” 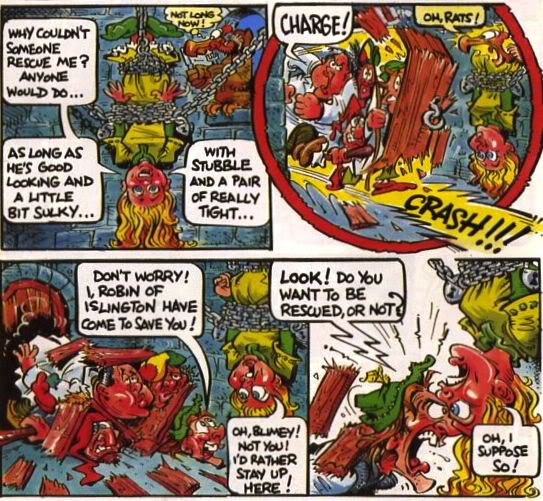 He is a jobbing artist – certainly not working on the scale of Coipel or Quitely, nor as famous as Bisley or (Jeff) Smith however this is because he is happily entrenched inside the British industry – by choice one would guess – with a distinctly English artistic style his work is rarely seen outside of the British Isles. This has led to working on the most english of titles – something he’s clearly enthusiastic about – including the Funday Times children’s supplement of the Sunday Times and more prominently, in the 90s the work of classic comic book art that was the set of eight Maid Marian and Her Merry Men comic adaptations of the popular Children’s BBC series.

Providing the artwork for the closing credits of the popular kid’s show, which ran between 1989 and 1993 – the adaptation to comic book, adapted by the lead writer, creator and star Tony Robinson (better known as Blackadder’s Baldrick) it wasn’t long before an adaptation was in the offing. Hard to imagine the final title sequence was finished before saw the wisdom of using Cemmick for the series of books. Seemingly blending the cartoon work of Jim Patterson of the Beano, anarchic Looney Tunes physicality and perfectly observed caricature of the existing cast the books were a ball thanks to Cemmick.

Doctor Who Poster (2011) - part of Cemmick's continued work with the BBC.

Robinson’s ideas were meticulously realised but no one was concentrating on that. Whether it was the gormless expressions of King John’s Guards Gary and Graeme as the dialogue was revealed or the deliberate miniaturisation of Tony Robinson’s Sheriff in relation to every other character, Cemmick added quirks, gimmicks, character ticks and details that were never present in the original while still putting across the personalities of each one of the distinctive cast.

It’s impossible to sail through a Cemmick page – his attention to detail and his joy in leaving prizes to those willing to take a longer, closer look pushed the value of the books well above what they might have been with a less enthused artist. In 2006-2007 he produced four all-new mini-comics which were included in the each of the four series DVD releases from Eureka Entertainment.

Mr Cemmick’s best-known cover artwork adorns several of the later covers of Tom Holt’s comic-fantasy novels, published by Orbit Books in the UK. Mr Cemmick was the third regular Holt cover-artist, following in the footsteps of Josh Kirby and Steve Lee. Mr Holt explained the transition from Lee to Cemmick being due to “some sort of falling-out between and the Orbit people” after his novel “Open Sesame.”

Cemmick’s cartoons and caricatures appear regularly in the UK Sci-Fi magazine SFX, and publications including “Take a Break” magazine. He co-created “N.U.T.S. Investigations” with Spitting Image and 2DTV alumnus Giles Pilbrow for The Sunday Times, and has produced full comicstrip artwork for several BBC magazines, including “Girl Talk” and “It’s Hot”. These official BBC comicstrips include adaptations of EastEnders, adventures of the Blue Peter pets, and most recently (as an interesting semi-follow-up to his work on MM&HMM), the latest BBC One version of Robin Hood (2006) in ‘Robin Hood Adventures’ issue 1 (BBC Magazines, 10–23 October 2007). Cemmick is currently producing 2 comic strips in the weekly BBC publication Match of the Day. As well as a double page comic strip in a new magazine based on the massively successful TV show Top Gear. The mag is called Top Gear Turbo.

In television, he has worked on anarchic rubber faced satire series Spitting Image as well as the afore-mentioned Maid Marian and Her Merry Men. He was also one of the designers and three main artists on the ITV television series 2DTV (2001), working on that programme for all of its five series’. He recently designed the logo for the revamped ITV animated series Emu (2007) starring Emu, Rod Hull’s famous sidekick – minus Rod Hull himself.

Impossible to ignore, Cemmick’s work is illustrative and only finds his way into the Practitioners list for his work on the Maid Marian Books – although his new work remains incredibly high in standard nothing has quite matched that work for sheer exuberance – understandably securing hgim such a long tenure with the BBC.

Most importantly from one person’s perspective, Cemmick is probably the most influential artist in my personal history. While others such as Jim Patterson, Geoff Senior, Liam Sharp, Adam Kubert, Simon Bisley and Frank Quitely have informed me and developed my interests away from where they started (Masters of the Universe), Cemmick revolutionised my thinking and made me really understand the liberties that could be taken with an empty page. Cartoonishness, characterisation, layout, panel filling, use of colours and humour in such an apparent anarchy that belies the actual work that has been sunk into it. The natural line work, the placement of a finger and a foot to add greater humour to proceeding makes the page look as though it could never be any other way. Paul Cemmick is both a world class artist and – I suspect – a great British secret. But without his influence, I and many other artists of the same age might not understand the true shape of funny on a page. Bridging that gap perfectly between the simple, straightforward comic pages of the Beano, Dandy, Buster and Whizzer and Chips and more adult fare like 2000AD, Oink and Viz. But more than that – he captured the timeless, spotless and universal moments better than the television series loaded with exactly the same material and made the themes last 20 years – and well beyond.

Personal thanks to Paul Cemmick for inspiring me to always look for the silly in any page – and in the serious – just look at a blank page and understand that between the words on the page and the final page there is a perpetual gap that artists get to fill and make their own.