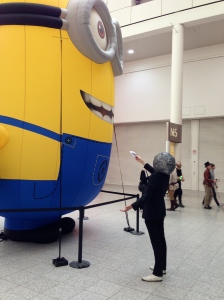 Okay, we’re late with this but it’s been a busy few weeks since MCM. In particular taking into account the fact that it took a week to recover from. It was an enormous success for the pair of us. Better than we anticipated. MCM is always a boomer for us but we love it even more when we see the regulars and those we’ve met at MCM before.

One of the highlights for us at this stage is seeing new fans mixing with older fans coming back for a little more Moon action. Massive, genuine thanks to everyone who came back from Moon 1 or came to see us having read the first two and recommended us to others who had just arrived at the table. The fun we had this time out, a combination of the event and the reception means we now have big plans for the next MCM and we hope to see you there!

In a momentary lull I got a chance to head on out into the crowds and grab some shots of some suspicious looking Moon characters. The Princess Leia one was a little awkward as she was slightly offended that I wanted her head covered but it’d’ve been reverse sexist not to frankly and I’m standing (slightly uneasily) by that.