I still remain utterly confused on how to work this website since Dan updated it. The fact that I agreed to it had nothing to do with it, there are now a sequence of buttons I have to hit and avoid otherwise I might break the website. Might take me a minute to get the hang of it.

Anyway, this is how I wish me and Dan were when no one was watching. Secretly we bicker like children (well I do, Dan remains stoical and sensible most of the time). In an astonishing lack of awareness of their new status, Frost and Pegg used the production of their first major feature film produced outside of the UK to tit about in the desert in almost the most cobbled together outfits you’ve ever seen.

I love this. It’s just the sort of thing I hope to do if we ever get to San Diego Comicon with Moon. Only Pegg and Frost’ve done it now so now we’ll just hunt Pegg and Frost. 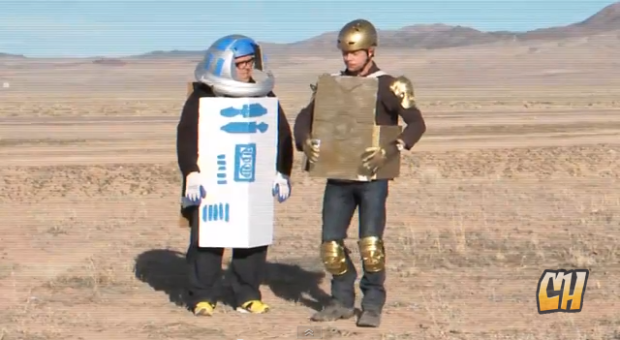 The Star Trek franchise continues with this follow-up to 2009’s reboot. J.J. Abrams returns to direct from a script by Damon Lindelof, Roberto Orci and Alex Kurtzman. The cast and crew of the Enterprise come back for a second tour of duty along with acclaimed actor Benedict Cumberbatch making his Trek debut as their most daunting threat yet.

While fans eagerly await any and every piece of content concerning J.J.’s frontier, the guys at MOVIECLIPS took it upon themselves to get their hands dirty in the excitement with this fan-made teaser trailer. They and we’ll be right on deck ready to bring you the official trailer when it debuts, until then, hope you enjoy!

Movieclips have made no secret that they think Cumberbatch is Khan – without a doubt the greatest nemesis of James T Kirk. Clearly taking a more cerebral route on this one (unsurprising for Abrams) if that turns out to be the case it is creating some theories online as to exactly what type of threat Cumberbatch will represent. Khan is very likely as Abrams is happily working back up through the original history (with some detours and re-envisioning).

Never mind what the plot is ; we here at BTB love a bit of the new Trek and will be posting up any new Trek news as and when.

Simon Pegg has been mainstream sci-fi for a long while. Enjoying a celebrity lifestyle as the world’s most well loved fan boy. There is literally no stone left unturned – The Editor in an episode of Doctor Who, Benji Dunn in the Mission Impossible franchise (clocking up two movies), Dengar’s voice in the latest series of Star Wars: Clone Wars, Newsreader in George A. Romero’s Diary of the Dead, Scotty in the Star Trek reboot, Reepicheep in The Chronicles of Narnia and one of the Thompson twins in Speilberg and Jackson’s The Adventures of Tintin: The Secret of the Unicorn.

So it’s nice to see him in this offbeat little number (and one that on first viewing makes next to no sense).

Jack is a children’s author turned crime novelist whose detailed research into the lives of Victorian serial killers has turned him into a paranoid wreck, persecuted by the irrational fear of being murdered. When Jack is thrown a life-line by his long-suffering agent and a mysterious Hollywood executive takes a sudden and inexplicable interest in his script, what should be his big break rapidly turns into his big breakdown, as Jack is forced to confront his worst demons; among them his love life, his laundry and the origin of all fear.

Strange, oddball and nicely off piste for an actor that’ll appearing next in the new Star Trek next year. Hats off to a nice guy publicly living the dream of every geek on the planet and getting away with it.

The Death and Return of Superman is one of those things that Steve and I have always differed on. Steve read it in the original issues as a kid (ie how you’re supposed to read it) and thought it was awesome. I read it in my twenties in a public library in Gravesend while local children threw rocks at the windows (ie how you’re not supposed to read anything) and was somewhat less enthused. There’s a good chance that some of you may not have read it at all but thankfully there is a man swooping to the rescue to fill you in on what the event was all about. It’s not Superman, it’s Max Landis.

As well as being the son of movie legend, John Landis, Max Landis is rapidly becoming something of a household name in his own right. With his script for the movie Chronicle earning him a mountain of praise from critics and audiences alike, it’s only a matter of time before he joins the likes of Duncan Jones in the ranks of famous children who have stepped well out of the shadow of their fathers.

First though, Max has a few things he wants to get straightened out and top of his list is ensuring that nobody forgets about DC Comics’ attempt to boost sales by killing off everybody’s Kryptonian. He does this with the help of Elijah Wood, Mandy Moore, Simon Pegg, a bottle of whiskey and some very funny Charlie Brooker esque ranting.

Ha ha! The extended version of the original trailer – with moving lips and dialogue!! Captain Haddock and Tin Tin (along with Snowy) on an almighty journey. Loadsa set pieces visible here which suggests there might be some serious twists and turns – in the style of Herge’s original stuff. Its all just a question of whether we’ve all had enough of investigative journalism right now.

We’re a couple of days late on getting this one up as we were away in Bristol but the trailer for Steven Spielberg and Peter Jackosn’s upcoming Tintin movie has finally landed. I’m probably more excited about this movie than I am about any other film this year and this wonderful trailer just helps to reinforce that. I’ve been a massive fan of Tintin ever since I was tiny and there’s pretty much nobody that I can think of who is better suited to bringing it to film than Spielberg.

There’s been a lot of negative talk about the ‘uncanny valley’ style of digital animation that the film uses, especially since Mars Needs Moms flopped so badly last month. For some reason many people really want this style of film making to go away which is a view I find hard to understand. I’ve been a fan of lifelike digital animation ever since Final Fantasy: Spirits Within (yeah, I know it’s not strictly done in the same way as this but it’s a similar idea) and I really think that it’s the best shot we have of moving western animation away from the ‘just for kids’ market. Perhaps it’s just the gamer in me who’s used to this kind of thing, but I really like it.

For a split second I was even tempted to see it in 3D…almost.