Kyoto station is a monolithic, grand and impressive structure, latticed with metal and steel pillars in a gun grey cathedral to industrialism and travel. It is impressive to say the least. Outside, however is a small camera stall looking out over the main entrance. On top of it is an icon as famous, if not potentially more famous and certainly more recognisable across Japan than the enormous building behind him. His name is Astroboy, and in terms of fame and influence he matches up to any celluloid mouse. Built from the premise of cheerful, less gritty story telling – Astroboy’s creator is considered the instigator of the ‘Golden Age of Manga’. The name of the man who brought hope to Japan after the Second World War through a new age in Manga is Osamu Tezuka. 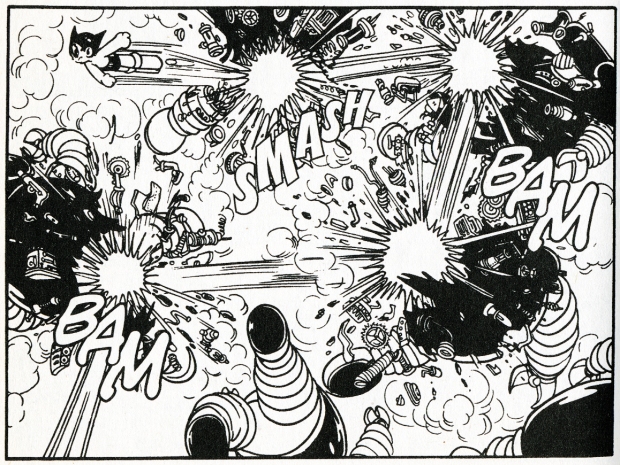 Born Tezuka Osamu on November 3, 1928 Tezuka was a Japanese cartoonist, manga artist, animator, producer, activist and – at one time – medical doctor, though he never practiced medicine. Born in Osaka prefecture, he is best known as the creator of Astroboy, Kimba the White Lion and Black Jack.

He is often known as the ‘Godfather of Anime’ and enjoys the reputation as the Japanese Walt Disney. Inspired very much by his namesake, Tezuka adapted much of the western idealism of Disney to the Japanese Manga, transferring ideas seamlessly that still now permeate modern Manga. Though his creations have moved far beyond the initial inspirations that spawned them.

Starting to draw comics in his second year of elementary school, he found a bug named ‘Osamushi’ in his fifth year. Fascinated by the similarity to his own name he adopted it as a pen name. He came to realise that he could use Manga as a way to convince people to care for the world. After World War II and the devastation that Japan itself had suffered during the conflict, Tezuka created his first piece of work – at the age of 17 – Diary of Machan and Shin Takarajima (New Treasure Island). These works launched the Golden Age of Manga. Their popularity and style offering people a new – and popular – way of reading Manga.

As a young boy Tezuka was very ill, his arms swelling up. The following treatment led him to want to become a doctor. He continued to draw as he studied medicine at Osaka University and obtained his medical degree. He arrived at a cross roads – familiar to almost all creatives when they try to decide which path to follow. Ahead of him a potentially lucrative career as a doctor, for which he was now almost fully qualified, or alternatively the life of a comic artist, not considered a particularly rewarding job. He turned to his mother for advice who replied “You should work doing the thing you like most of all.”

Tezuka graduated from Osaka University, having gained his Medical degree but would never practice medicine. He would however use his medical knowledge to enrich his sci-fi manga, such as Black Jack.

His creations include Astro Boy (Tetsuwan Atomu in Japan, literally translated to “Iron-armed Atom”), Black Jack, Princess Knight, Phoenix (Hi no Tori in Japan), Kimba the White Lion, Adolf and Buddha. His “life’s work” was Phoenix — a story of life and death that he began in the 1950s and continued until his death.
In January 1965, Tezuka received a letter from Stanley Kubrick, who had watched Astro Boy and wanted to invite Tezuka to be the art director of his next movie 2001: A Space Odyssey. Tezuka could not afford to leave his studio for an entire year to live in England, so he refused the invitation. Though he could not work on it, he loved the movie, and would play its soundtrack at maximum volume in his studio to keep him awake during the long nights of work.

Tezuka headed the animation production studio Mushi Production (“Bug Production”), which pioneered TV animation in Japan. The name of the studio derives from one of the kanji (虫 – Japanese reading: mushi, English meaning: bug,insect) used to write his name, bringing that quiet day discovering a bug bearing his name back firmly to his present day. Robust, tenacious and built for purpose ‘Bug’ productions continued to produce innovative and fascinating projects.

Many young manga artists once lived in the apartment where Tezuka lived, Tokiwa-sō. (As the suffix -sō indicates, this was probably a small, inexpensive apartment.) The residents included Shotaro Ishinomori (Cyborg 009, Kamen Rider) ; Fujio Akatsuka (known as the Gag Manga King; also influenced by western work, namely Buster Keaton and MAD magazine); and Abiko Motou and Hiroshi Fujimoto (who worked together under the pen name Fujiko Fujio and created the long-running series Doraemon, the main character of which is officially recognised as a cultural icon of modern Japan – much like Astroboy). All these men opted to live close to the starting point of the great master. Hard to think of an equivalent today for western artists though perhaps the difference is more cultural. Never-the-less the influence of Tezuka was undeniable and clear in order to inspire these men to wish to see the same views and follow so closely in his personal path.

Thanks to his prolific output, pioneering techniques and innovative redefinition of genres Tezuka earned himself incredible titles such as ‘the father of Manga’, ‘the god of comics’ and ‘kamisama (Japanese for spirit or natural force) of manga’.

Tezuka is known for his imaginative stories and stylized Japanese adaptations of western literature. He loved reading novels and watching films that came from the West. Tezuka’s early works included manga versions of Disney movies such as Bambi. His work, like that of other manga creators, was sometimes gritty and violent. However, he stayed away from graphic violence in some titles such as Astro Boy.

The distinctive “large eyes” style of Japanese animation was invented by Tezuka, drawing inspirations on cartoons of the time such as Betty Boop and Walt Disney’s Bambi and Mickey Mouse. His productivity is awesome in it’s scale – certainly dwarfing almost all modern artists, the Complete Manga Works of Tezuka Osamu (手塚治虫漫画全集, published in Japan) comprises some 400 volumes, over 80,000 pages; even considering this, it is not comprehensive. His complete portfolio includes over 700 manga with more than 150,000 pages. However, the vast majority of his work has never been translated from the original Japanese – which has led to a lack of fame in the west that other creators such as Kazuo Koike, Goseki Kojima and Katsuhiro Otomo have enjoyed.

Tezuka died of stomach cancer on February 9, 1989, at the age of 60. His death came about one month after the death of Hirohito, the Shōwa Emperor of Japan. In an afterword written by Takayuki Matsutani, president of Mushi Productions, that was published in Viz Media’s English language release of the Hi no Tori manga, it is said that his last words were, “I’m begging you, let me work!”

The city of Takarazuka, Hyōgo, where Tezuka grew up, opened a museum in his memory.
Stamps were issued in his honor in 1997. Also, beginning in 2003 the Japanese toy company Kaiyodo began manufacturing a series of figurines of Tezuka’s creations, including Princess Knight, Unico, the Phoenix, Dororo, Marvelous Melmo, Ambassador Magma and many others. To date three series of the figurines have been released. A separate Astro Boy series of figurines has also been issued, and continuing popularity for fans throughout Japan are annual Tezuka calendars with some of Tezuka’s most famous artwork.

His legacy has continued to be honored among Manga artists and animators and many artists including Hayao Miyazaki (Spirited Away), Akira Toriyama (Dragon Ball), and Kazuki Takahashi (Yu-Gi-Oh!) have cited Tezuka an inspiration for their works.

Far reaching influences: Vampires (1966 -67 and 1968 -69) by Osamu Tezuka reveals parallel styles seen in Warner Bros and Disney, and even the later chapters of Jeff Smith's Bone.

Anywhere that the mark of modern manga and anime are found globally started with the stroke of Tezuka’s pen in post-war Japan. His intention was to spread joy. He has also spread images of science fiction worlds unimaginable in the west, although many are violent and malevolent they have moved millions and all carry the ‘wide-eyed’ innocence of Osamu Tezuka. An unknown legend in the west – he is partially responsible for almost half the design and artistic influence visible in modern comics and animation. East and West. Though these things are hard to quantify his intention to ‘spread joy’ through manga is still being achieved. Shelves and shelves of manga on every subject imaginable find their way to millions of Japanese readers every day. And every page carries a little bit of the joy Tezuka hoped for. Just a little ‘bug’ in the corner of every panel.

Here’s a clip from the upcoming Ghost Rider movie to see if it revs your engine. First a high speed car chase through the desert to whet your appetite!! There are two directors, both of whom look to be stunt specialists. This sequence definitely bares that out.

And before we write this off – take a look at this – Ghost Rider’s ability to infest any vehicle with his willpower takes new and brilliantly entertaining twists. I like the way he laughs as he does it. Wouldn’t you?